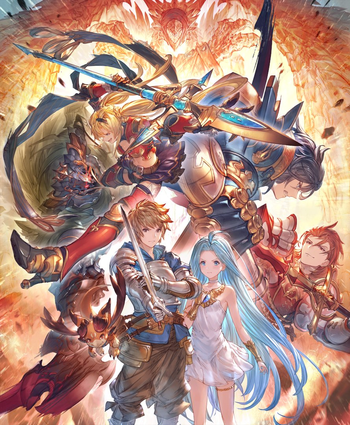 Believe in Victory
A world scattered like clouds through an endless blue sky. Life is a tempest of adventure and combat, and the wind is never at rest.
How long will your journey last? Where will it lead? All you can know for certain is the heft of the weapon grasped in your hand, and your own resolve to wield it.
But do not despair. You have but a brief time to burn-so blaze. Light the skies with your glory. Put even the stars to shame.
Are you prepared? Will you give yourself wholly to this fight?
Come, you children of fate. The hour of reckoning is upon us.
Advertisement:

Announced in December 2018, Versus launched on February 6, 2020 for Japan (published by Cygames themselves) and other Asian regions (published by Sega), with XSEED Games bringing the game to North America on March 3rd, 2020. Marvelous Europe also released the game in EU/PAL territories on March 27th, 2020. The game was also released on PC (via Steam) on March 13th, 2020.

Like Guilty Gear Xrd and Dragon Ball Fighter Z, Versus utilizes the similar 3D graphics on a 2D playing field, powered by technology behind the Unreal Engine. The game's official website can be found here

Cygames has stated the plot is separate from the original mobile game. Versus is accessible and friendly to newcomers, but also features deeper game mechanics to appeal to those in the fighting game community.

was conducted from May 31 to June 1, 2019 in order to test the game's online features, which were available only for specific time periods.

This page details tropes that are found, or introduced in the game, including its trailers. For non-Fighting Game tropes regarding characters in the original Granblue Fantasy, see here.