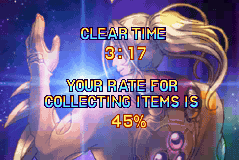 100% will net you Fanservice.
Advertisement:

A feature common in video games that focus on collecting stuff and/or earning achievements, letting the player know how many pieces of hidden content (collectables, unlockables, etc.) the game has in total, how many the player has already found, and, by simple math, how many are still out there.

Those are often found in the game's pause menu or file select screen, and will show up in the ending as one of the factors used to grade your overall performance. 100% Completion usually leads to a reward, but that may not be the case if other determinants like clear time or use of continues influence the end result as well.

Often, separate counters are provided for different types of hidden content in different levels/locations to further assist the player in finding that Last Lousy Point.