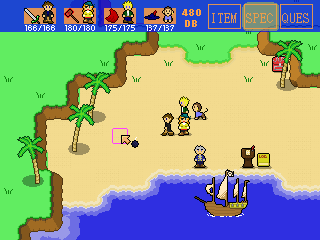 "The golden chest is the legendary, ultimate treasure said to exist since the birth of the world. They say all of piracy began when, centuries ago, explorers sailed out in search of it. The truth is, nobody really knows what's inside, but whatever it is, it's got to hold unfathomable wealth and power! ...If we can get our hands on the key and chest, we'll be the greatest pirates of all time!"
Advertisement:

Dubloon is a freeware RPG developed by Greg Lobanov, the creator of Assassin Blue, Escape from the Underworld, and co-creator of Cowboy Killa, over the course of about a year.

The game is set in an Ocean Punk world where the Navy has almost complete control of the seas, leaving pirates scattered and vulnerable. The story follows a crew of four pirates who seek out the world's ultimate treasure - a golden treasure chest - taking on the Navy in the process.

The game uses a unique mouse-based interface and incorporates elements of many different games, such as combat based on Action Commands and field moves.