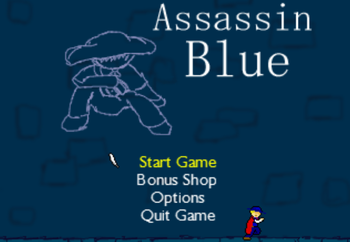 is a freeware story-heavy platformer created by Greg Lobanov ("Banov"), who would go on to create Wandersong and Chicory: A Colorful Tale, in 2009. Besides pure platforming, it has an added focus on swordfighting, which allows you to block and break enemy guard in addition to attacking, as well to eventually unlock combo attacks.
Advertisement:

The story takes you to a war-torn world, where the titular assassin, who is only known by his codename, lost his family as collateral damage was 14. He now serves a shadowy leader he only knows as boss, who uses him to eliminate the leaders of all opposition. Blue justifies the dozens of deaths on his hands by believing that each one brings the war closer to an end, and therefore saves more lives in the long run. However, he can't lie to himself forever, and his orders keep nagging at the back of his mind more and more as the story goes on.