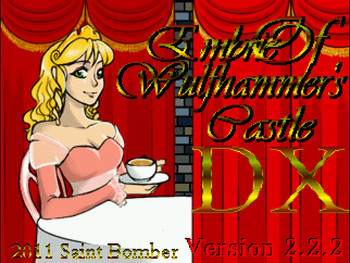 is a fantasy Role-Playing Game done with RPG Maker 2003. If the official website is down, it can be downloaded at the mirror

From the game's manual, The Duchess of the fair land of Elstwhere comes by carriage to the Marque of Wulfhammer, presumably to marry its lord, Embric of Wulfhammer. Embric, however, is nowhere to be found. The Duchess, not being the sort to sit around idly, embarks on her own quest to get to know the body of the eccentric populace of Castle Wulfhammer, among them the ladies and dwarves of the Awesome Fellowship, those rescued on the Fellowship's grand adventures, a bevy of mysterious townsfolk, monsters, nobles, demons, and devils, waitresses, clerks, clerics, and more.

But there is something strange about this castle and its people. As the mysteries begin to unravel, and the real lives and futures of the people of Wulfhammer come into question, who can rescue those who are so used to doing the rescuing?

Primarily a comedy and heavily Yuri (having originally been released to the /u/ board of 4chan), the object of the game is not to fight monsters with a band of heroes to save the world from some cataclysm, but to explore the stories of the people of Castle Wulfhammer. There is almost no traditional combat and the game is packed with scenes and endings, and lots and lots of characters.

A sequel is in indefinite hiatus entitled "A Marquess of Notoriety" which involves the next generation.

After a resurgence in the popularity of her games, Saintbomber would rebrand as Large Battleship Studios

and begin to produce Yuri RPG Maker games once more. Embric would receive an official re-release on Itch.io