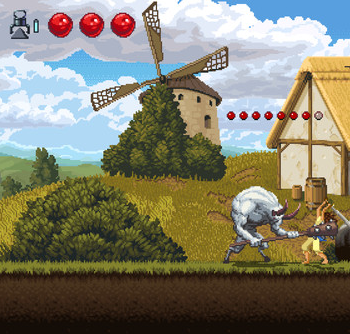 The protagonist is on the right. The giant beast on the left used to be her pet goat.
Driven Out is a 2D Side View Hack and Slash game, developed by Jens Kolhammar and released for PC, PS4 and Xbox One on October 18th, 2019.
Advertisement:

It was just an typical day full of hard work for the unnamed farmer in the approximate medieval era, when one day, a strange object falls out of the sky next to you. Almost immediately, a black knight shows up and tries to kill her and claim the artifact, but he stumbles and falls, dropping his sword. Before long, she's using it to cut her way through first the other knights, and the a wide assortment of ever-weirder enemies.