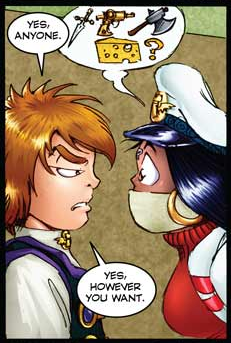 A picture is worth a thousand words, and some Speech Bubbles do, in fact, contain just this: a picture.

Pictorial Speech Bubbles are generally used in two ways. First, to show the general gist of what the character is saying, without focusing on what their exact words are. Second, to represent the character's general mood, attitude or thoughts, even when he isn't specifically saying anything. It's not always easy to tell the two variations apart.

Rebus Bubble, and Symbol Swearing are subtropes. Say It with Hearts would also happen, if an example had a Heart Symbol in it, or was just consisting of them. Compare also Speaking in Panels.