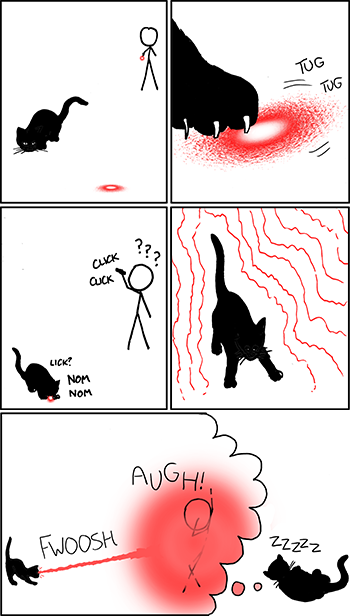 You want to show the action from someone's point of view, but walls of text are often a good way to lose readers in the typographic flood. Rather, some authors choose to employ a method for showing the action as it's being told (or thought about), by enclosing the relevant comic panels inside the speech or thought bubble.

Speaking in Panels doesn't require that the entire narrative be laid out definitively, though that's certainly an option. Some authors may instead decide to show only specific key parts of the story and allow their readers' imaginations to take over between the panels.

Distinct from the Rebus Bubble in that Speaking in Panels actually includes full comic panels that show or imply a narrative, while Rebus Bubbles are more simply icons and/or equations to indicate a line of reasoning or thought process.