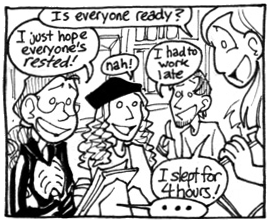 Brittany (right), preparing to run a 24-hour D&D game on her birthday with several friends, including Shazzbaa (left).
Advertisement:

Completed Journal Comic by Shazzbaa. Can be found here

The comic concluded at the end of March 2012. The creator has continued her work with the fantasy adventure comic Runewriters.