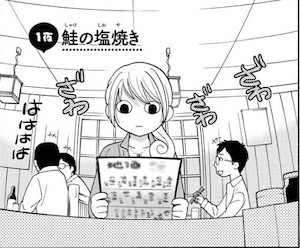 The protagonist in her natural habitat.
Advertisement:

Wakako Zake is an ongoing manga series from creator Chie Shinkyu that has run in Monthly Comic Zeon since 2011. It follows 26-year-old office worker Wakako Murasaki as she indulges in her favorite pastime: going to various restaurants and/or izakaya bars and enjoying a nice meal by herself.

Wakako Zake differentiates itself from many other notable food-related manga with its utter simplicity. It doesn't have an central conflict, an overarching plot, or even a cast of significant characters outside of Wakako herself. It makes no special effort to be dramatic, educational, or comedic. It's essentially a Slice of Life Journal Comic centering around the pleasure of food and drink, as well as a character study of a young woman who's alone with her thoughts.

The series has been adapted into an Anime and a live-action Dorama. It also served as an inspiration for a Korean remake, Naege Geonbae (Cheers to Me).

The manga (and franchise in general) contains examples of the following tropes:

Tropes unique to the Anime adapation include:

Tropes unique to the Dorama adaptation include: