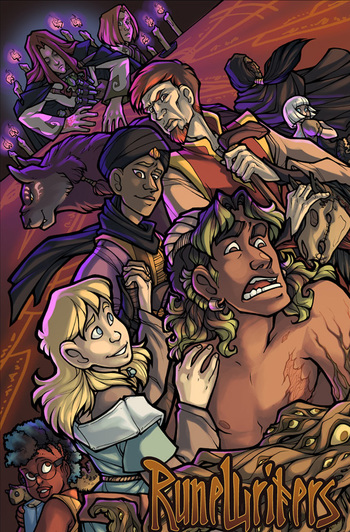 Experiencing Tentacle Difficulties
Runewriters is a fantasy adventure webcomic set in the land of Varænske, a world plagued by strange demonic monsters known as aberrants. Fortunately, some people are runewriters, who use magical runes to unlock their powers to help and protect others.
Advertisement:

The story follows Childhood Friends Tareth ("Tarri") Ari and Severian ("Sev") as they travel to solve a... small problem of Sev's. Specifically, Sev screwed up a Voluntary Shapeshifting spell and is now stuck with tentacles instead of hands. Tarri, who was born deaf and as a result has been very sheltered by her family, volunteers to go along and vouch for Sev as he seeks a healer that can correct his miscast spell, as he is already being mistaken for an aberrant himself. Along the way they get caught up in others' problems and discover many ways that magic can go wrong.

is written and drawn by Shazzbaa, the creator of Journal Comic Today Nothing Happened and artist of As We Were, a side-comic to Sorcery 101. The comic updates on Tuesdays. The comic went hiatus at the start of 2014 due to the author taking time off for family matters, but started updating again on January 4, 2016.