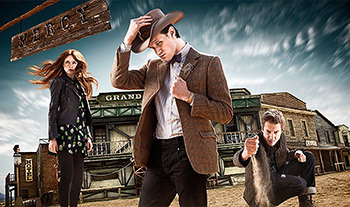 An Out-of-Genre Experience when a series other than The Western picks up a six-shooter, dons a Stetson and rides off into the sunset. In other words, a non-Western temporarily becomes a Western (or at least a pastiche thereof).

This can be done through Time Travel, virtual reality, some form of historic re-enactment, a Dream Sequence or, for works set in the right period but wrong location, a trip out West. This can be motivated by, or turn into, a Quest to the West. The effect can also be achieved with a Fantasy Counterpart Culture.

Can count as a Costumer.