Home on the Remains 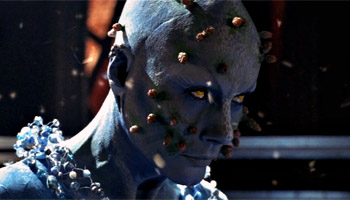 Chiana leads Moya to a crystal-mining colony situated on the decaying corpse of a Budong, a planet-sized monster. All the crew are desperately hungry, having finished off the ship's food reserves, but are not wildly impressed with the idea of visiting a giant rotting corpse that apparently sprouts acidic pustules, especially when Chiana admits that she fled the place after stealing from her friends there. Zhaan, however, reveals that she is covered with buds, a sign that she's starving; they'll have to find food here, or she will die.

As most of the crew are allergic to the buds, most of them leave for the colony; Aeryn, being the least affected, remains aboard Moya to care for Zhaan. Chiana arrives just in time to have to Mercy Kill her former lover there, Temmon, who ran headlong into one of the acid pustules while fleeing from the Keedva, a carnivorous beast that lives in and feeds on Budong corpses. Temmon's brother B'Sogg, who had an unrequited crush for Chiana, is now in charge of the colony and orders the mines sealed off until the Keedva can be hunted; out of grudging "charity," he provides the Moya crew with fungus to eat. Crichton takes some up for Zhaan, but in a fit of primitive rage, she explains that only meat can sustain her now; the buds growing from her are a poisonous natural weapon generated by starving Delvians to kill predators, which they can then eat.

Chiana tries to offer B'Sogg sex in exchange for some meat, but he says that he's only interested in a long-term sexual relationship, with the implication that it won't be very pleasant for Chiana. D'Argo overhears and attacks B'Sogg, making things even worse.

Rygel tries to gamble for food, only to end up being out-cheated by the resident Professional Gambler, and is forced to admit that he doesn't actually have anything to bet with. Threatened by the other gambler, he goes down into the mines to hunt for something to pay him with. Separately, D'Argo also heads into the mines with Altana, an old friend of Chiana (and yes, it's just possible that she's that kind of "friend") , who has discovered a vein of crystals that will make her rich for life, and buy as much food as any of them need.

Back on Moya, Aeryn uses sun lamps in an improvised attempt to help Zhaan, but it only makes her emit clouds of numbing spores; Zhaan herself becomes dangerously paranoid as her condition begins to disrupt her rational thought process, accusing Aeryn of trying to kill her. The spores are beginning to damage Moya's sense organs, so Aeryn tells Pilot to prepare a transport pod for her and Zhaan- only for Zhaan to vanish while her back's turned.

After learning of D'Argo's little voyage into the mines, Crichton hurries in after him, only to bump into Rygel; seconds later, a strange whistling sound is heard, and the two of them are promptly attacked by the Keedva. To Rygel's fury, Crichton evades the beast by climbing onto his thronesled. Just as they are about to drop into the monster's reach, another whistling sound draws it away. Some distance away, The Keedva attacks D'Argo and Altana, killing the old woman and badly injuring D'Argo. When they are brought out of the mine, Chiana tells Crichton that she suspects B'Sogg of being behind the attacks.

After searching the entire ship for Zhaan, and with Moya's spore-induced condition worsening, Pilot and Aeryn are forced to expel the spores by decompressing Moya, which might kill Zhaan in the process. After much agonizing, they start the decompression, only excluding the command deck where Aeryn has taken refuge. Zhaan, however, is also in command, having levitated into the ceiling to escape notice. She attacks Aeryn, but Aeryn manages to talk her down briefly and then knock her out with a head-butt.

Crichton, following B'Sogg into the mines, discovers B'Sogg's cache of meat and crystals, only to find himself cornered by the owner. Revealing that he's managed to tame the Keedva and summon it with the aid of a whistle (hence the whistling sound heard before the attacks), B'Sogg sets the monster on him and leaves him for dead. After a long fight, Crichton manages to kill the animal by crushing its head in a powered door. Chiana confronts B'Sogg in a passage and threatens to shoot him; B'Sogg confidently sneers that while Chiana might be a thief and a tralk, she's not a killer. By way of answering, she fires and either accidentally or deliberately hits an pustule in the tunnel wall next to him; the acid pus horrifically burns his arm off, and as he screams for the same Mercy Kill that was given to his brother, Chiana coldly departs.

Back on Moya, the crew barbecue and eat B'Sogg's pet. Zhaan apologises to Aeryn for the things she said and did in her paranoia. D'Argo meets Chiana alone and they kiss before he leaves her to consider things. Chiana's response is "Whoa!".