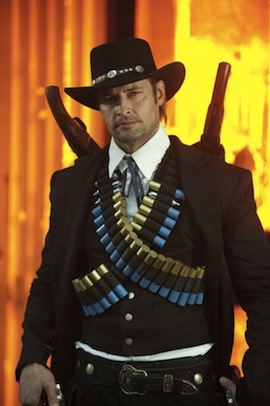 He's paid to shoot paintballs, not the breeze!

This year's western-themed Spring Fling takes a turn when Dean Pelton announces a "short" game of last-man-standing paintball assassin, and the ice cream company sponsoring their party announces the prize: $100,000 cash. The group splinters, reforming 5 hours later to find a cache of ammo that could help them win the game. In the meantime, the Black Rider, a mysterious "network television handsome" shooter is taking out the competition.