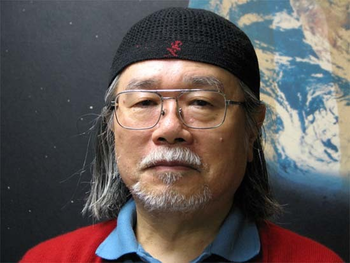 Leiji Matsumoto (born January 5, 1938) is one of the great names of anime and manga, primarily for being the principal creator of what is probably one of the earliest shared continuities over several anime series, creating a unified arc commonly referred to as the Leijiverse. The characters and settings, combined with a strong reception in the West, meant that his early series were often the primary introduction to anime for Western viewers of the '70s and early '80s.

A little-known fact is that Matsumoto was not the creator of Space Battleship Yamato, but was brought on to the project by the producer. However, it is acknowledged that Matsumoto's vision was the primary ingredient for the success of the series.

Matsumoto's wife, former manga artist Miyako Maki, has been credited with the creation of both the Licca-chan doll (the Japanese equivalent of Barbie) and quite the contributions to the Shōjo and josei manga genres. In fact, Matsumoto himself was a notable shojo artist in his early years, when Space Opera, his real passion, sold poorly. Reportedly, they met at a manga magazine. It is sometimes speculated that it was the Licca-chan's success, which made them financially independent, enabled Matsumoto to pursue his artistic vision largely free from Executive Meddling.

Anime series of note include:

Accepted an invitation from the French musical group Daft Punk (who are great admirers of his work) to come out of retirement and collaborate on the concept album/anime feature film Interstella 5555: The 5tory of The 5ecret 5tar 5ystem. In addition, on October 23rd 2012 he was honored with the Ordre des Arts et des Lettres

. The French seem to really love him.