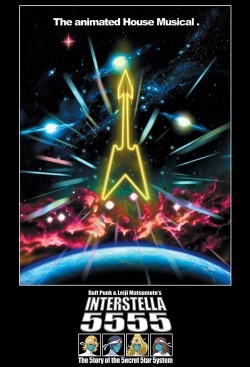 Interstella 5555: The 5tory of the 5ecret 5tar 5ystem is an anime-style visualization of the Daft Punk album Discovery produced by Toei Animation with visual supervision by Leiji Matsumoto. A group of blue-skinned extraterrestrial musicians are kidnapped, brainwashed, and altered, mind and body, to be identical to ordinary humans. Under the control of their abductors, they become rock stars on Earth, playing their music and skyrocketing to massive fame. Can an alien pilot rescue the band, return their memories and get them home? Or will they be forced to play their part in the scheme of the evil, greedy Earl de Darkwood?

The music tracks are the same as the Discovery album:
Advertisement: