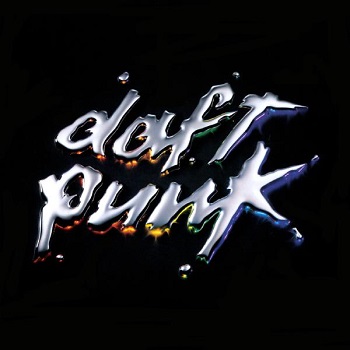 Discovery is the second studio album by the French electronic duo Daft Punk, released on March 12, 2001.

Moving away from the harder Chicago-style house of their debut album, Homework, Discovery marked a shift towards a cleaner sound that was largely influenced by '70s funk, R&B and disco, as well as a futuristic aesthetic evocative of outer space that contrasted Homework's rough urban feel. The album's rollout also saw the introduction of the duo's now-iconic robot costumes, which came with a story that they had become robots as a result of their studio exploding while they were working on a sampler on September 9, 1999 at 9:09 AM.

Like Homework, this album made extensive use of sampling, albeit in more experimental ways. On top of creating new music with the samples, many of the tracks contain additional parts that were written and performed to them, and in some cases sequence incredibly short sound clips together to form new melodies in a manner akin to Todd Edwards' "micro-sampling" technique (with Edwards fittingly co-producing one of the album's tracks, "Face to Face").

The album's liner notes list only four cleared samples, but the Internet has found or claimed to have found more uncredited ones, some of them taking years to deduce due to the aforementioned "micro-sampling" technique making the original tracks unrecognizable. While Thomas Bangalter, one half of the duo, stated that half the samples he saw associated with the album online were untrue, a sample long unconfirmed but heavily circulated and accepted as fact — the sampling of Eddie Johns' "More Spell On You" for "One More Time" — was finally verified following the band's breakup in 2021note It was also found that the band pays royalties for the sample to this day bi-annually to the song's label.

The album was later used as the soundtrack to the anime film Interstella 5555: The 5tory of the 5ecret 5tar 5ystem, directed by famed creator Leiji Matsumoto. All of the music videos of Discovery are clips of the film, which details a band of extraterrestrials who are kidnapped and brainwashed to become rock stars on Earth. Footage from the movie were adapted as promotional videos for the first four tracks, which were released consecutively as singles.