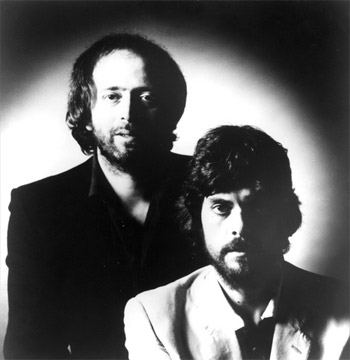 The Alan Parsons Project was a British Progressive Rock band active between 1975 and 1990. The core group consisted of Alan Parsons (Producer/Engineer/Co-Writer/Occasional Instruments and backing vocals) and Eric Woolfson (Keyboards/Lyricist/Vocalist), with additional members recruited as required for each individual project. After the band's dissolution, Woolfson went on to work on musicals (including several which continued the themes of Project albums) before dying of kidney cancer in 2009, while Parsons created several solo albums and has toured extensively playing mostly Project songs, with his band taking the name of "The Alan Parsons Live Project". APP are known for a more accessible style of progressive rock than many of the other bands of the era. They rarely used strange time signatures, and for the most part stuck to 4-5 minute radio-length songs. They often used full orchestration in their songs, with some of the best examples being "The Cask of Amontillado" (from Tales of Mystery and Imagination) and "Silence and I" (from Eye in the Sky).

While the remainder of the band's line-up changed constantly, some members became essentially permanent parts of the band. These include arranger Andrew Powell (who conducted and arranged all of the orchestral work), guitarist Ian Bairnson (who contributed all of the band's lead guitar work), bassist and backing vocalist David Paton (who played on every album except the last, played extra guitar parts and even sang lead vocals on a few songs), and drummer Stuart Elliott (who played on all albums except the first two). And although the project used a wide range of vocalists, Chris Rainbow and Lenny Zakatek appeared most often out of them all (asides from Woolfson and Paton). Over time, the band became more pop-influenced, and in the mid-1980s, synthesizers started to replace their orchestra, reaching their zenith on Stereotomy, an album that is almost entirely Synth-Pop. During the last four albums, saxophonist/keyboardist Richard Cottle was featured as the designated synthesist, and his brother Laurence was the bassist on the last album they did.

Despite their reluctance to perform live, the Project in its original incarnation performed at a Night on the Proms concert in 1990. Zakatek, Bairnson, Paton, Elliott, and the Cottle brothers performed as the Project while Parsons mixed the concert and Powell conducted the orchestra.