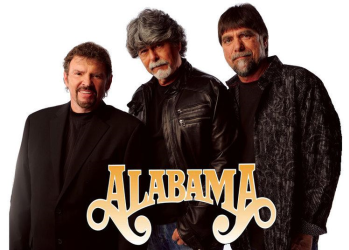 A long-lasting Country Music band. For most of its career Alabama was composed of three cousins; Randy Owen (lead vocals, rhythm guitar; born December 1, 1949), Jeff Cook (lead guitar, keyboards, fiddle, backing vocals; born August 27, 1949) and Teddy Gentry (bass, backing vocals; born January 22, 1952); Massachusetts native Mark Herndon (drums; born May 11, 1955) rounded out the quartet for much of their existence, although three different drummers had played in the band before he joined in 1979.
Advertisement:

The band had a humble start in 1977 with "I Wanna Be with You Tonight" on the GRT label, which only managed a #78 peak on the charts. When GRT declared bankruptcy and went out of business before they could release a follow-up single, the cousins learned that a contractural clause forbade them to record for another label. The band worked for more than a year to raise funds to buy out their contract, touring the south in a beat-up van. Finally, in the late spring of 1979, they landed at MDJ Records, where they recorded their first new material in two years. Included were the songs "I Wanna Come Over" and "My Home's In Alabama."

"I Wanna Come Over" marked Alabama's first top 40 hit on the Billboard Hot Country Singles chart, but it was the second of those two songs – the southern rock-fused "My Home's in Alabama," the homage to their home and the story of their struggles – that put them on the map. "My Home's in Alabama" peaked at No. 17, but it went a long way toward paving the band to superstardom and led to them signing with RCA Records. Even though "I Wanna Come Over" would all but become forgotten, it did provide the template for the other side of Alabama's musical style: the mellow pop-styled ballad, which would be used on the far-better known singles "Feels So Right," "There's No Way" and "Forever's As Far As I'll Go."

Signed to RCA Records in the spring of 1980, the band quickly superseded the accomplishments of those first two top 40 country with the massive country rocker "Tennessee River." The song became the band's first No. 1 hit, and for the rest of The '80s, the band sent single after single into the penthouse, missing only once that entire rest of the decade with the No. 7 "Tar Top." In the first half of the decade, many of the band's singles also crossed over to pop radio, including "Feels So Right," "Love in the First Degree," "Take Me Down" and "The Closer You Get," all of which reached Top 40 on the pop charts. Alabama also employed a distinctive crossover sound, blending the strong rhythm sections of rock and the breezy soft-rock harmonies of the Eagles with plenty of fiddle solos and country-friendly lyrics. They were also one of the first country groups to play all their own instruments on records(with the exception of most of Herndon's drum tracks being replaced by electronic drums for much of the 80's), for writing many of their hits themselves, and for having a stage presence that closely mirrored traditional rock band staging: Herndon at the rear, Owen in front of him, and Cook and Gentry on Owen's right and left respectively. Their success was such that in 1989 they were named "Artist of the Decade" at the Academy of Country Music awards.

The band's momentum slowed a bit come the 1990s, despite its biggest No. 1 hit in 1990 with "Jukebox in My Mind." Although its last No. 1 hit came in 1993 with "Reckless," Alabama continued to chart consistently within the Top 10 until the end of the decade. Album sales, however, began to slip, and the crossovers just weren't coming on as strongly (save for a collaboration with *NSYNC on "God Must Have Spent a Little More Time on You"). Alabama charted its last Top 40 hit in 2001 with "When It All Goes South" and then effectively retired following a 2003 tour. Two albums of inspirational music followed in 2006 and 2007, and Owen released a solo album in 2008. Alabama has largely been semi-retired in The New '10s, although Cook, Gentry and Owen occasionally come out to do new projects, including a cover of "Are You Sure Hank Done It This Way" for a Waylon Jennings tribute and a guest appearance on Brad Paisley's "Old Alabama", both in 2011. They also did a duets album with various country artists covering their big hits, and made their first "official" album in 11 years, Southern Drawl, in 2015.

"My trope's in Alabama, no matter where I lay my head":