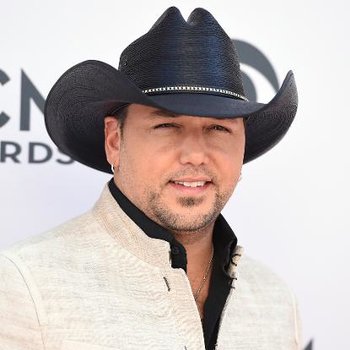 A prominent Country Music singer from Macon, Georgia. Jason Aldean, (born Jason Aldine Williams, February 28, 1977) didn't exactly get off to a running start. Although he first hooked up with producer Michael Knox in the late 1990s, it took several failed record deals (including one with juggernaut Capitol Records) before the independent Broken Bow Records signed him in 2005.
Advertisement:

Aldean's first album was a solid enough release, bringing him three straight top 10 hits on the country charts, including the #1 hit "Why". The album included several co-writes from Big Kenny and John Rich of Big & Rich. He had the inevitable Sophomore Slump with Relentless, but came back strong with Wide Open. This third album produced three straight #1 hits, including "She's Country", which was the biggest country hit of 2009, and the ubiquitous "Big Green Tractor". And just to prove that he's back for good, My Kinda Party has produced five hits, including the Kelly Clarkson duet "Don't You Wanna Stay". His subsequent albums have seen almost all of their singles top the charts, including "The Only Way I Know", a Massive Multiplayer Crossover with Luke Bryan and Eric Church, plus the electropop "Burnin' It Down", written by Florida Georgia Line. The same duo also wrote the rocking "Lights Come On", the lead single to They Don't Know, and the mellow ballad "You Make It Easy" from Rearview Town.

Aldean is known for being more rock-influenced than his peers, which is saying a lot in a genre that is already showing a great deal of rock influence in the mainstream. Expect loud electric guitar over steel, although "The Truth" and "Big Green Tractor" show he can do a more country sound if he wants.