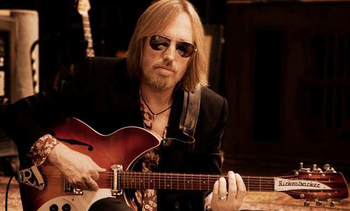 Well I started out, down a dirty road,
Started out, all alone.
And the sun went down, as I crossed the hill,
And the town lit up, the world got still.
—"Learning to Fly"
Advertisement:

Thomas Earl Petty (October 20, 1950 – October 2, 2017) was an American singer-songwriter and multi-instrumentalist from Gainesville, Florida. He was the frontman of Tom Petty and the Heartbreakers and a member of Mudcrutch. He was also a member of the supergroup The Traveling Wilburys, under the pseudonym of Charlie T. Wilbury Jr. He recorded a number of hit singles, many of which remain heavily played on adult contemporary and classic rock radio. Likewise, his music, most notably his hits, have become increasingly popular among younger fans as he hosted sold-out shows in his recent tour dates.

Petty was also a vocal critic of the modern recording industry and the disappearance of independent radio stations.

He was supported by his band, The Heartbreakers, for the majority of his career. He occasionally released solo work, as was the case with 2006's Highway Companion, on which he performed most of the backing instrumentation himself. However, members of The Heartbreakers played on each of his solo albums and the band always backed him when touring in support of those albums. He also toured with Mudcrutch in order to promote their debut album. Petty was managed by Tony Dimitriades from 1976 until Petty's death in 2017. On February 3, 2008, Tom Petty and the Heartbreakers performed at the Super Bowl XLII Halftime show.

He had a minor but credited acting role as a mayor in Kevin Costner's post-apocalyptic disaster film The Postman (where it's very subtly hinted that his character actually is Tom Petty) and was the voice of Elroy "Lucky" Kleinschmidt (Luanne Platter's redneck boyfriend turned husband) on the later seasons of the FOX sitcom King of the Hill (though the first time Lucky appeared on a King of the Hill episode was "The Redneck of Rainey Street," which focused on Kahn and Minh becoming trailer trash after Kahn, Jr. gets rejected from a college prep summer school program).

Petty died on October 2, 2017 in Malibu, California, after suffering cardiac arrest earlier in the day. He had just played the final gig of the Heartbreakers' year-long 40th anniversary tour the week before.

"I'm runnin' down the tropes:"