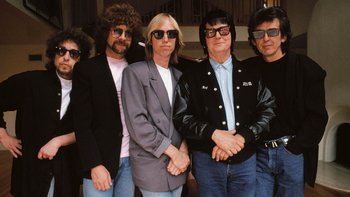 For years, Harrison played around with the idea of forming a band out of established musicians who could come together as equals and make music by hanging out and jamming. This began to take shape during production of Harrison's eleventh studio album, Cloud Nine.

Temporarily based in Los Angeles and away from his FPSHOTnote Friar Park Studio, Henley-on-Thames home studio, Harrison had asked Lynne to help produce a b-side and arranged to record it at Dylan's garage studio. Before the session he and Lynne shared a meal with Orbison and invited him to join them at the recording and on the way there, they stopped by Petty's house to retrieve a guitar and asked him to come along.

And so, by sheer coincidence, some of the best musicians of the 20th century came together to record a b-side before realization dawned that Harrison had found the band he'd been looking for.

One of the greatest supergroups of all time, this rare confluence of nearly 200 combined years of musical history came together in the very late 1980s to produce two albums (or so—see below).

The Traveling Wilburys provide examples of the following tropes: