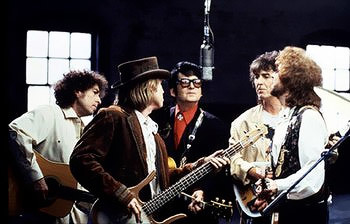 Left to right: Bob Dylan, Tom Petty, Roy Orbison, George Harrison, Jeff Lynne.
Tex Perkins came from Brisbane's musical fringe, with his band The Dum-Dums. He had a passion for country music, but strange and loud. Kim Salmon was making Perth sound like the world's biggest swamp with his band The Scientists. They came together as a hard rock supergroup, The Beasts of Bourbon. It was more like collision than collabration.
Long Way to the Top: Stories of Australian Rock & Roll
Advertisement:

A band formed by other musicians who are already famous for their other work.

Supergroups have a bad tendency not to last very long, most breaking up after five years on average. What usually happens from there is that the members return to the respective acts they were famous for in the first place. They might also be a One-Book Author, collaborating for just one album or a few concerts before going back to their solo work.

Notable examples (the bands that the members are from are listed):