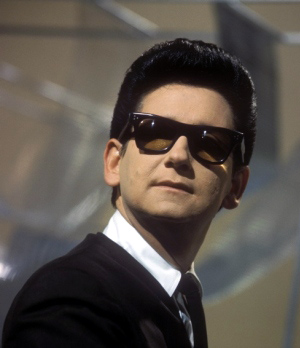 "When you were trying to make a girl fall in love with you, it took roses, the Ferris wheel and Roy Orbison."
—Tom Waits
Advertisement:

Roy Kelton Orbison (April 23, 1936 – December 6, 1988) is considered by his peers to have been the most powerful voice to ever sing Rock & Roll. Before The Beatles, he was also one of its most innovative composers.

Roy was born and grew up in Texas. He got a guitar for his sixth birthday, and within a year, he was committed to a life of music. He grew up a fan of Lefty Frizzell, Hank Williams, and Jimmie Rodgers. He also took in the various sounds of 1940s Texas: Rhythm & Blues, Tex-Mex, Zydeco, and the orchestral music of Annunzio Mantovani.

In the early 1950s, he formed a band called The Teen Kings. He met Johnny Cash in 1955, and Cash recommended producer Sam Phillips. The Teen Kings sent the soon-to-be-legendary Sun Records producer a recording of a Rockabilly song called "Ooby Dooby", which impressed Phillips enough to sign them. Under Phillips' direction, they re-recorded "Ooby Dooby", and it became their first hit. More rockabilly songs and much touring followed, but the Teen Kings broke up at the end of 1956 over royalty disputes. Roy stayed at Sun as a solo act and songwriter. His song "Claudette" (about his girlfriend and soon to be wife) became the B-side of The Everly Brothers' big hit "All I Have To Do Is Dream", earning Roy his first real money. But Roy found Sun Records frustrating, and left for country music song publisher Acuff-Rose.

Roy met Joe Melson in 1958 and the two became a songwriting team. Roy recorded his material for RCA Victor, but when his contract ran out in 1959, his agent Wesley Rose found a better place for him, Monument Records in Nashville.

All the pieces needed for success were now in place. Roy and Joe hit their stride as songwriters, beginning with "Uptown", Roy's first hit since "Ooby Dooby". Monument Records provided top-notch session musicians, and allowed Roy to experiment, bringing in strings at his request. And in 1960, Roy finally found the power of his voice, with "Only The Lonely", which went to #2 and made Roy a star. After "Only The Lonely", Roy began to experiment with song structure. He introduced the Boléro Effect to American pop with "Running Scared", his first #1, in 1961.

For the next four years, Roy was one of the biggest names in American music, filling a void left behind by the rock and roll pioneers of The '50s who were now either drafted, dead, in jail or playing gospel music. A string of hits from 1961 to '64 showcased his Opera singer-like voice and broke new ground in songwriting and production, including "Crying", "Dream Baby", "In Dreams", "It's Over", and "Oh, Pretty Woman". Following the pattern of "Running Scared", these songs were two and a half minute operas of heartbreak, loneliness, and hope for new love, with plenty of Plot Twists, Manly Tears, and in the uptempo numbers, manly swagger. He also created an onstage persona of a mysterious Man In Black, singing while standing perfectly still, wearing a black suit and Cool Shades.note This wasn't planned - Orbison left his regular glasses on a plane during a tour with The Beatles and had to wear his prescription sunglasses to be able to see to perform at the gig. Both the audience and Orbison liked the look, Orbison finding it helped with his Stage Fright problem. This was quite the opposite of his real personality however, and was more about helping him deal with stage fright.

Roy went on a UK tour in the spring of 1963 with The Beatles, who were just achieving fame in their home country. The Beatles were huge Orbison fans, and Roy became friends with John Lennon and especially George Harrison. Further tours took him around the world, and wherever he went, huge crowds came to see him.

"Oh, Pretty Woman" turned out to be the peak of his career, however. After 1964, The Beatles changed the direction of rock music, and Roy was left behind. His writing partner Joe Melson left to pursue solo success. His agent Wesley Rose took him to Metro-Goldwyn-Mayer (along with its record division) so that he could follow Elvis Presley into film. Wesley also took over as Roy's music producer. Without the Nashville session musicians, Roy didn't have the same sound, and record sales plummeted.

Tragedy struck in 1966 when his wife Claudette was killed in a motorcycle accident. Roy's movie career ended after one movie, The Fastest Guitar Alive. He recorded Cover Albums of Hank Williams and Don Gibson songs, which didn't sell. Tragedy struck again in 1968 when his house burned down while he was on tour, killing two of his children. Orbison remarried in 1969, to Barbara Jakobs.

Throughout the '70s, Roy remained popular outside of the U.S., especially in Britain and Australia. He continued recording, but he had disappeared from American pop music. Meanwhile, a new generation of rock, pop, and country musicians began putting Cover Versions of his songs on the charts. Sonny James had a country #1 with "Only The Lonely", Linda Ronstadt covered "Blue Bayou", Don McLean did "Crying", and Van Halen did "Oh, Pretty Woman".

Roy won his first Grammy Award in 1980, for a duet with Emmylou Harris on "That Lovin' You Feelin' Again". But what really started Roy's comeback was the use of "In Dreams" in David Lynch's 1986 noir film Blue Velvet. More movies used his songs the next year, one of which, Hiding Out, won him another Grammy for a remake of "Crying" as a duet with k. d. lang. Roy had become a star again. He was inducted into both the Rock & Roll Hall of Fame and the Nashville Songwriters Hall of Fame in 1987. He starred in a television special, Roy Orbison and Friends, A Black and White Night, playing his songs with an all-star band that included Bruce Springsteen, Elvis Costello, Jackson Browne, Tom Waits, Bonnie Raitt, Elvis Presley's final band (guitarist James Burton, pianist Glen D. Hardin, bassist Jerry Scheff, and drummer Ronnie Tutt) and musical director T-Bone Burnett.

Roy began working on a new album with Jeff Lynne of the Electric Light Orchestra. Lynne was working on George Harrison's Cloud Nine, and George invited his old friend to sing on it. They asked Bob Dylan if they could use his home studio. Harrison went to Tom Petty's house to pick up a guitar. By the end of the day, all five musicians had written a song together, "Handle With Care", and decided to form a Supergroup, The Traveling Wilburys. They pretended to be half-brothers and took Stage Names: Roy named himself Lefty Wilbury after one of his favorite musicians, Lefty Frizzell. Their album Traveling Wilburys Vol. 1, went to #3 and stayed on the charts for over a year. Meanwhile, Roy restarted his solo project with Lynne. Roy wrote songs with Lynne and Petty, and many others contributed songs, including U2, Elvis Costello, and Roy's son Wesley. Mystery Girl was recorded in October and November of 1988, and only needed to be mixed and mastered for its release in early '89. But on December 6, Roy died of a heart attack.

Roy's death was observed around the world. Mystery Girl became the biggest album of his career, and "You Got It" went to #1 on the adult contemporary chart. A "final" album of unreleased songs, King of Hearts, was released in 1992. His widow Barbara managed his legacy, releasing best-ofs, box sets, and live performances, until her death from cancer in 2011.