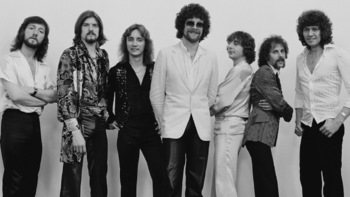 ELO's classic lineup as of 'Out of the Blue', band leader Jeff Lynne is center
"Mister Blue Sky,
Please tell us why,
You had to hide away for so long,
Where did we go wrong?"
"Mr. Blue Sky"
Advertisement:

Formed in 1970 by Roy Wood and Jeff Lynne from The Move, ELO was originally conceived as a rock band with classical instruments and sounds — an electrified light orchestra, hence its name. In other words, it was intended to bring the synthesis of Classical Music and rock that the inchoate genre of Progressive Rock promised to its logical conclusion. After the release of their first album in 1971, Wood left the band, leaving Lynne and drummer Bev Bevan. That didn't stop them, however. After recruiting some new members, ELO kept getting stronger throughout the 1970s.

ELO's sound started changing considerably as time went on. After the release of the concept album Eldorado, their songs started becoming less classical-sounding and more rock. Out of the Blue, considered to be their best album, started bringing even more synths into their music, and Discovery taking a (mostly) disco sound.

Sadly, ELO started to decline after the release of their second concept album, Time. Secret Messages was successful at first, but quickly fell off the charts. After three years, Balance of Power was released in 1986 and ELO was seemingly finished for good, with Lynne becoming a very prolific and successful producer, helping to revive both Roy Orbison's and George Harrison's careers and producing a very successful solo album for Tom Petty (he would later produce two more of his solo records.)

In 1989, Bev Bevan and Mik Kaminski created ELO Part II and released an eponymous album the same year. It was followed by Moment of Truth in 1994. Bevan then left the band in 1999 and, to settle a lawsuit filed by Lynne, eventually sold his share of the ELO name to him. The remaining ELO Part II members continue to perform, however, renamed as "The Orchestra", and released No Rewind in 2001. They later toured in fall of 2015, but they continued to perform regularly in Walt Disney World's "Garden Rocks" series during the spring Flower and Garden Festival at Epcot.

In 2001, Jeff Lynne released another ELO album, Zoom. However, only Lynne and Richard Tandy, the band's primary keyboardist, were featured players. Lynne then reformed ELO with some new members and started a new tour. However, it was cut short, primarily due to the illness and subsequent death of his friend George Harrison. Tandy and Lynne later continued to perform ELO songs sporadically, notably for a short concert film and documentary recorded at Lynne's own bungalow, and at a highly successful concert in Hyde Park in 2014 later released on home video. The interest led to a new album release by Lynne in 2015, Alone in the Universe, with the band now billed as "Jeff Lynne's ELO". The newly-reconstituted group has gone on several tours since, with another album, From Out of Nowhere, releasing in 2019.

Their discography (with notable songs) includes:

Not to be confused with Yellow Magic Orchestra.

Today's forecast calls for these tropes: