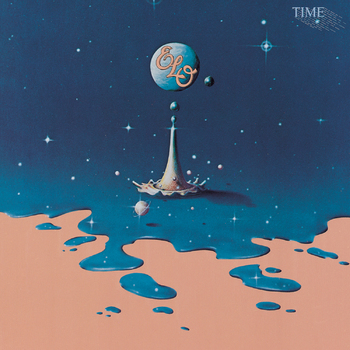 "I only meant to stay a while."
"Just on the border of your waking mind,
There lies another time
Where darkness and light are one.
And as you tread the halls of sanity
You feel so glad to be, unable to go beyond.
I have a message from another time."
—"Prologue"
Advertisement:

Time is the ninth album by the Electric Light Orchestra, released in 1981. On release, it swiftly topped the UK Albums Chart for a while before wearing off, and the more immediate retrospective didn't look so kindly on it when comparing it to the likes of Out of the Blue. Still, it maintains a rather sizeable cult following to this day (particularly among those interested in Zeerust), and is generally considered to be one of ELO's more spectacular albums.

The story of ELO's second Concept Album is about someone from The '80s who is magically whisked 20 Minutes into the Future— specifically, the year 2095. Things look interesting... but then he realises that he's unable to go back. He's there to stay. It turns out he's committed an Accidental Time Travel, and before long he starts suffering from a constant Nostalgia Filter that nearly all of the album's lyrics go into detail about. And then things go From Bad to Worse; he then realises that he can't see his girlfriend or anyone close to him, because they're all in the past. Or all of this might just be a dream. Not even Jeff Lynne knows the interpretation.

There are many reasons as to why this album is one of their more significant releases. Firstly, there's the more polarising aspect of this being the point where "electric" began to completely supplant the "light orchestra"— synthesizers and electronic effects play a much bigger role here, and would go on to play an even bigger role in the next two albums (this is cited as a musical inspiration in itself). Secondly, it was the first and, to this day, one of the few notable concept albums to have Time Travel as its main plot point. Thirdly, the album is widely considered to be a Trope Codifier for a lot of Time Travel tropes, in particular the aforementioned Accidental Time Travel and Fish out of Temporal Water ones.

Lastly, there's the unintentional association this album gained with, of all things, the anime fandom. In 1983, a group of amateur animators who would later become Studio Gainax created a promotional short for the Daicon IV science fiction convention, featuring a girl in a Playboy Bunny outfit battling numerous pop culture figures from both Japanese and western media (tying in with the lack of regional limits for represented media at the convention). The animators just so happened to choose "Prologue" and "Twilight" from this album as the main background music for the short— without permission from Jet Records. Consequently, barring a one-off sale of 8mm prints to con-goers as a way to recoup funds, the short has never been able to see an official release; the closest it ever got was an unauthorized LaserDisc run based on a telecine of one of the 8mm prints. Despite this, the circulation of LaserDisc copies of the short allowed it to live on among anime fans, and as the Daicon IV short became a defining element of Gainax's brand, so too did ELO's Time slowly come to be more and more readily associated with the production. In the process, the short wound up giving the album and the band a new audience that they never would've expected to pick up, all because of a small group of amateur animators from a completely different country.

Time was supported by five singles: "Hold On Tight", "Twilight", "Ticket to the Moon"/"Here Is the News" (released as a double A-side), "Rain Is Falling", and "The Way Life's Meant to Be".

Here are the tropes, coming to you every hour on the hour:

"Though you ride on the wheels of tomorrow, you still wander the fields of your sorrow."