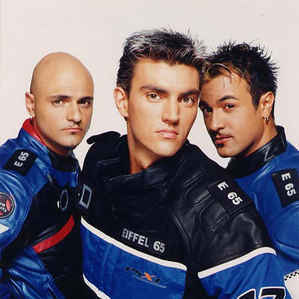 Yo listen up here's a story about a little band that lives in a blue world...

Eiffel 65 are an Italo Disco/Eurodance/Europop band (whose first album is actually Trope Namer for Europop) from Italy consisting of three men: Jeffrey Jey (real name Gianfranco Randone), Maurizio "Mauri" Lobina (known as Apollo pre-Eiffel 65) and Gabriele "Gabry" Ponte. They are probably one of the most popular Eurodance bands out there, despite having only one song that everyone remembers — "Blue (Da Ba Dee)".

It started when Jey (previously singer for another Eurodance band, Bliss Team), Lobina and Ponte met each other at Bliss Corporation, a record label specializing in eurodance. With the help of a computer, which randomly picked one word from a given list, they settled on name Eiffel, but their producer accidentally scribbled number 65 on a label copy while writing down a phone number, and the three decided to roll with it.

They split up in 2005 to let Gabry focus on his solo carrer, and the other two members started a Spiritual Successor band called Bloom 06. The three finally reunited in 2010, and released their first post-reunion song, "Panico"/"Critical", in 2016. They later released the single "G Nel Body" with Alien Cut in 2021.