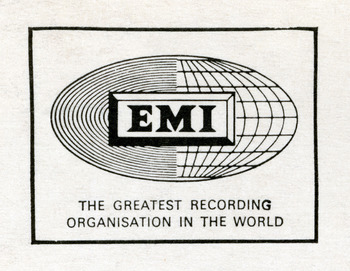 ...when it was replaced by this logo.
Advertisement:

EMI (originally Electrical and Musical Industries) was a British multinational electronics and music conglomerate, and once one of the largest and most successful record labels in history.

The company can trace its origins back to 1897, when American inventor Emile Berliner, the creator of the gramophone, established The Gramophone Company in London. The company quickly grew to dominate the music industry.

In the 1930s, however, the music industry declined with The Great Depression. And so, in 1931, the Gramophone Company merged with the Graphophone Company (formerly the British branch of Columbia Records, by then an independent company) to become Electrical and Musical Industries. (Labels involved in the merger included Columbia, Electrola, His Master's Voice, Odeon, Parlophone, and the discount labels Regal and Zonophone, which underwent a mini-merger to become Regal Zonophone.) It was also around this time that it established its famous studio on Abbey Road, and stereo sound systems were developed.

For a while, EMI served as the European licensee for RCA Victor and Columbia Records, allowing the company to have access to American talent. These relationships came to an end in the 1950s. To compensate, EMI acquired Capitol Records in 1955, which gave the company its own roster of American stars, including Frank Sinatra and Nat King Cole, among others.

From this point forward, EMI found considerable success, particularly with the arrival of The Beatles and The Beach Boys in The '60s. They also bought the Grade Organization, of which Lew Grade (head of ITC Entertainment) was a founder, for their access to top talent. 1969 saw the company buy the Associated British Picture Corporation, giving them extensive film and television assets, including ABPC's majority 51% share of Thames Television, which it retained until the late 1980s and disposed of entirely in the early 1990s.

In the late 1960s and into The '70s, EMI sought to expand, establishing new record labels like Harvest Records (an imprint dedicated to Progressive Rock and other "hippie" genres) and acquiring existing ones, for instance United Artists Records and the latter label's jazz subsidiary Blue Note. EMI would change UA's name back to Liberty Records, since the label was no longer associated with the film studio. In 1978, it formed a second major US label, EMI America Records. In 1979, it merged with Thorn Electrical Industries to form Thorn EMI. Their film business went from highs to lows — hits like The Deer Hunter, Convoy, and Death On The Nile, and bombs like the 1980 remake of The Jazz Singer, Honky Tonk Freeway and Can't Stop the Music. The last one was a film starring The Village People, released during the height of the anti-disco backlash. This, along with bombs like Raise the Titanic! and The Legend of the Lone Ranger, mean that EMI's new American joint-venture with ITC, Associated Film Distribution, was dead in the water (resulting in AFD's remaining backlog being sold to Universal). This caused them to wind down their film operation, before selling it all to The Cannon Group in 1986 (including their half-interest in Thorn EMI Video, a joint-venture home video label with HBO). The library's gone from owner to owner over the years and currently rests with StudioCanal (itself a sister company of EMI through Vivendi).

Through the 1990s, EMI continued to expand, acquiring even more record labels, including Chrysalis Records, Virgin Records (including Charisma Records, which Virgin owned by then) and their artists. In 1996, the group demerged from Thorn, becoming EMI Group PLC.

Entering the 2000s, with Thorn gone, EMI seemed to be pressing the metaphorical reset button, focusing exclusively on music. Unfortunately, that strategy ended up working against them in the long run. With the rise of digital music sharing and sales (the former of which, in turn, coincided with rising piracy), EMI differed from other music companies in that they took a more laissez-faire approach by not committing to strict digital copy protection. While this helped the company avoid PR disasters like Sony BMG's rootkit scandal, it ended up hurting them in a business standpoint since they were also liberally spending millions to keep artists on their payroll, and many of these artists were long past their prime. As a result, EMI's profits and market share suffered. EMI attempted to address these concerns by placing an unsolicited takeover offer for Warner Music Group, but they backed off when WMG pulled the Pac-Man defense (WMG offering its own takeover offer for EMI).

In 2007, it was acquired by the equity firm Terra Firma, which sought to restructure the company and cut costs, with plans to cut almost a third of the employees (an estimated 2,000 of them). This ended up backfiring spectacularly; many of EMI's longtime artists, including The Rolling Stones (Band), Radiohead, Paul McCartney, Queen and Robbie Williams jumped ship in protest, and since the company had spent millions on their contracts as previously mentioned, they ended up saddled with almost $4 billion in debt. Some high-profile artists also faced public feuds with EMI, with Thirty Seconds to Mars notably trying and failing to get out of their contract with EMI-owned Virgin, resulting in a highly-publicized lawsuit. The album This Is War is largely seen as a massive Take That! to EMI.

In 2011, investment bank and financial services firm Citigroup took temporary ownership of EMI. With no clear plan to steer the stinking ship, Citigroup elected to gradually liquidate the conglomerate. Universal Music Group was the winning bidder for the company's recorded music business, which comprised the bulk of its assets. Only one problem: since UMG already had a strong foothold in Europe, the European Union's antitrust authority required that the European division needed to be sold off. This would've been troublesome since Parlophone Records, which antitrust regulators singled out for separation, owned the Beatles' extensive recording library, considered to be EMI's crown jewel. Ultimately, UMG arranged a deal with regulators where they would divest most of EMI's flagship UK and European operations, as well as Parlophone and minor labels UMG had owned but no longer considered valuable, in exchange for ownership of the Beatles' music library as well as Virgin Records (excluding its French operations, which were under Parlophone by then), its associated labels, distribution of all Apple Records material, and EMI's businesses in mid-tier markets such as Ireland, Italy, Switzerland, Germany, Austria and the Netherlands. The rest of EMI's businesses worldwide, including its entire North American operation (which housed the prestigious Capitol label), were not targeted for separation.

The sale of the businesses was completed on September 28, 2012, and the EMI name was gone from its releases beginning April 1, 2013, dissolving EMI for good. Universal gained ownership of the EMI trademark as part of the sale and used it to form Virgin EMI Records, which handled European distribution of the EMI music libraries that UMG acquired, including the namesake Virgin label (Stateside, distribution of EMI material not divested, including Virgin, is handled by Capitol). UMG subsequently set up a British branch for Capitol, which was a first for that label, as they had outsourced distribution to Parlophone beforehand, to handle both the Beatles' recordings and to develop its own dedicated roster of artists.

Sony/ATV Music Publishing took over its publishing branch coinciding with the UMG sale (which still bears the EMI name under license from UMG), and Warner Music Group acquired the separated EMI businesses, including Parlophone and the rest of EMI's UK and European operations in May of 2013.note This was actually a consolation prize of sorts for WMG; they had actually bid for EMI's record unit during the auction, and when UMG won out they unsuccessfully lobbied the EU to block the sale on antitrust grounds. For legal reasons, Parlophone nowadays regards the Beatles' time under them as an Unperson (save a small mention in their website); despite this, UMG continues to feature the Parlophone label on current reissues of pre-1967 Beatles material, licensing the label's iconography from WMG. Several months prior to the Parlophone divestiture, WMG reached agreements with the Independent Music Companies Association (IMPALA) and Merlin Network to sell the recorded music libraries of various artists, worth a reported $200 million, to both groups in an effort to offset consolidation triggered by the EMI/UMG merger. Notably, Radiohead's Parlophone albums were sold to their current label XL Recordings, while most of Chrysalis' UK library was reacquired by label co-founder Chris Wright through Blue Raincoat Music.

The ex-UMG businesses that were spun off, V2 and Sanctuary (the latter of whom owned the Pye Records archives and Iron Maiden's discography in North America), were respectively sold to PIAS and BMG Rights Management in separate transactions.

The EMI name would be revived by UMG on June 16, 2020, when Virgin EMI Records was renamed to just EMI Records, with the "Virgin Records" name being reverted to imprint label status under EMI's ownership.

EMI was also the European distributor for American labels such as MGM Records, Mercury Records (until it was bought by Philips) and United Artists Records (which EMI would acquire). EMI also distributed Island Records for a time until that label was bought by PolyGram. 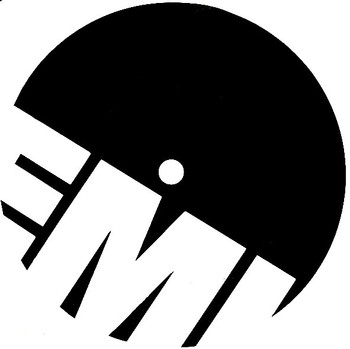 EMI Records logo used until 2010, when it was replaced by the red block logo above.
Starting in 1973, EMI finally began an actual label named EMI Records (logo at right). Its roster in various parts of the world included: