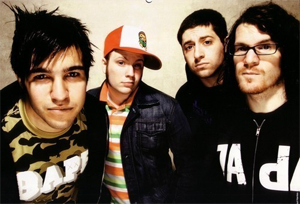 Fall Out Boy (or FOB for short) are an American rock band, formed in 2001 in Illinois. The band consists of Patrick Stump (vocals, rhythm guitar), Joe Trohman (lead guitar), Pete Wentz (bassist, lyricist), and Andy Hurley (drums). They have nothing to do with the mascot of the Fallout game series, but are instead named after Radioactive Man's faithful sidekick, as Trohman and Stump are diehard Simpsons fans.

While they've tackled a number of genres, the band's most popular and acclaimed work falls pretty squarely under pop punk, and they are considered one of the most influential bands in the genre of their time. They're also regularly considered as one third of "the Holy Emo Trinity"note a moniker generally applied and agreed upon by younger fans on social media alongside Panic! at the Disco and My Chemical Romance, but whether or not they can be classified as emo depends on your definition of emo.note They might not define themselves as such anymore, and the influence they took from early emo acts like Braid are all but gone from Folie A Deux onward, but since when has that ever stopped anybody from trying?

Following their rise to prominence in the 2000s, the band went on a hiatus starting at the end of 2009. During this time, Stump started a solo musical effort, Wentz started a dancehall band-turned-EDM act called the Black Cards, and Trohman and Hurley wrapped up work with rock supergroup The Damned Things (also featuring members of Anthrax and Every Time I Die). Andy was also the drummer for Enabler for several years, and Joe started a new band called With Knives (where he does lead vocals). Joe and Andy would later return to The Damned Things in 2019 to make a new record and do touring, while Andy helped form Sect in 2015 and would later take part in Racetraitor's own reunion in 2016, and is still active with both acts.

In 2013, the band confirmed the end of their hiatus as they finished recording their fifth album, Save Rock and Roll; their sixth, American Beauty/American Psycho, was released in 2015. After a cryptic trailer release stunt in Chicago-area movie theaters that went horribly wrong when they didn't air at the time the band advertised, fans eventually discovered what was next: the band's seventh album M A N I A. Originally planned to release in late 2017, the album was instead delayed to early 2018, as the band felt it was being "rushed" and wanted to make something they felt more comfortable with releasing.

Other notable deeds the band has committed include almost getting a Guinness World Record for playing a live concert on all seven continents in a certain amount of time and actually getting a Guinness World Record for doing the most press interviews within a 24-hour time span. They also have a comic called Fall Out Toy Works, a Cyberpunk love story with one big mind screw of an ending — as is to be expected from them.

Do tropes apply to them? Why yes, of course.