Music / As I Lay Dying 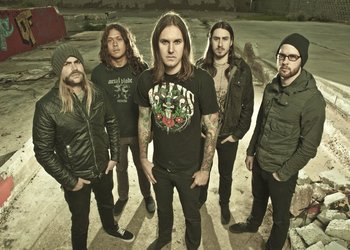 As I Lay Dying are an American Metalcore band that formed in 2000. They are named after the book of the same name. They have released seven full-length albums, the latest one having come out in 2019. On their first two albums, they had a more standard sound, though they would add elements of Melodic Death Metal beginning with the widely acclaimed Shadows are Security and Thrash Metal in their music starting with An Ocean Between Us, which has been so far been regarded by fans as their best work to date.

On May 7, 2013, frontman Tim Lambesis was arrested for allegedly trying to hire a hitman to kill his wife. He initially plead not guilty, but eventually switched his plea to guilty and was sentenced to six years in prison on May 16, 2014. During this time, the remaining members went on to form Wovenwar with Shane Blay of Oh, Sleeper (in addition to Phil Sgrosso's side project Poison Headache, which eventually became his main band after he split with Wovenwar) and have been met with a decent amount of success. Lambesis was released near the end of 2016 and in 2017, Lambesis announced he would make new music under the As I Lay Dying name, with none of the other members involved. In 2018, to the shock of the metalcore community, the original lineup reunited and released the song "My Own Grave". They then resumed touring together and released a new album in 2019 called Shaped by Fire.

Tropes associated with this Band: