Music / The Fall of Troy 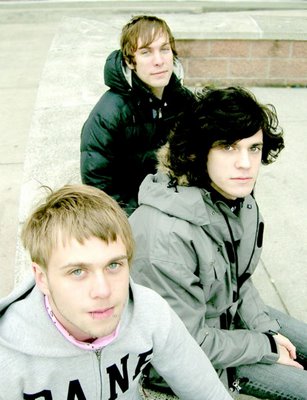 The Fall of Troy’s original formation (from top down): Andrew Forsman, Thomas Erak and Tim Ward
The Fall of Troy is a Progressive Rock and Post-Hardcore band from Mulkiteo, Washington. It was formed by Thomas Erak on vocals and guitar, Andrew Forsman on drums and Tim Ward on bass and backing vocals (usually screams). Tim was temporarily replaced with Frank Ene until the band's hiatus, but is now back.
Advertisement:

Originally a four-man band, including second guitarist Mike Munro, called The Thirty Years War. The band got their name name by flipping randomly through a history book. After Munro left due to personal reasons, the remaining three continued, renaming themselves to The Fall of Troy using the same method as before, after finding out there was another local band with the name The Thirty Years War.

The trio is known for their complex guitar riffs, unusual time signatures and combination of clean singing and screams.

The band broke up in 2010, but reunited in 2013. Thomas Erak confirmed work on a new album in 2014, and also noted that the band's work from that point onward would be released freely and that shows would be booked based on fan demand.

As the Thirty Years War

As the Fall of Troy

The Fall of Troy provides examples of: