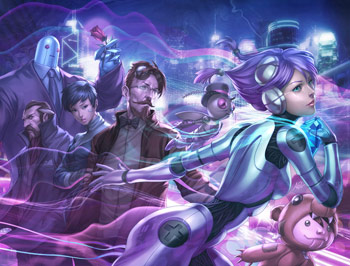 "Oh baby, you're a classic..."
Advertisement:

A five issue Comic Book miniseries written by Brett Lewis (co-writer of the Bulletproof Monk comic and writer of The Winter Men) and with art by Imaginary Friends Studios. The initial concept was created by Fall Out Boy bassist/lyricist/frontman Pete Wentz with illustrator Nathan Cabrera and fashion designer Darren Romanelli.

Taking place mainly in a Cyberpunk version of Los Angeles, the comic focuses on a robotic toy maker called The Toymaker who is barely keeping his company, Fall Out Toy Works, afloat. Years before, he was in the forefront of robotics technology, now he's being harassed by lawyers. In comes Baron, the man who has Los Angeles in a vice grip, controlling all forms of industry and even the local weather. He's prepared to pay the Toymaker handsomely if he manages to do the impossible: create a female robot capable of loving another being.

After a rough start, the robot Tiffany (named after an old song called "Tiffany Blews") is activated. She needs to experience life in order for her programming to function properly. Baron, being the dominating figure that he is, won't be having any of that. Tiffany is implanted with other people's memories, averaged out to maintain a balance. On top of the Toymaker dealing with a failing factory and a robot going through an existential crisis living with a man she might not even want to love comes another complication...The Toymaker has fallen in love with his creation. She might just feel the same. With Tiffany caught in the middle of the Toymaker and the Baron, who won't come out worse for wear?

With a story that explores What Measure Is a Non-Human?, the nature of love, whether or not love is any less real if it's programmed (into a human OR a robot), and a very, very, weird ending, Fall Out Toy Works manages to be nothing (yet everything) one would expect from a comic book based on Fall Out Boy. Much like My Fair Lady meets Blade Runner, but weirder.

The entire comic through Atomeka Press in webcomic format through Keenspot

and in individual issue format through Graphite Comics

A Motion Comic adaptation is currently in Development Hell. If and when it does get released, it'll feature the voices of Patrick Stump (as the Toymaker), Pete Wentz (as Crybaby), Anna Faris (as Tiffany), and Jaime King (as Gravity Welles). Development Hell isn't new for Fall Out Toy Works as in its initial run, the releases for the last three issues took much longer than expected due to the writer being in a coma and Fall Out Boy going on break around the end of the series run. Ouch. The series was intended to expand further into a multimedia franchise with toys, fashion, and animated movies, with only the fashion component really being delivered on.

These pages contain spoilers, some of which may be unmarked. Proceed with caution.