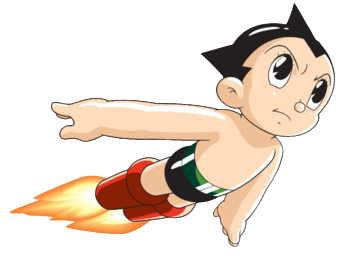 Senbei: That is because you are a robot, you don't change.
Arale: I wanna wanna wanna grow big!
— Doctor Slump
Advertisement:

A robot built to look and/or act like a child. A good number of these are boys, but there are many that are girls.

Possibly made as part of a Robo Family, or to be taken care of as a child of a human family (possibly as a Replacement Goldfish for a lost child of the creator or if the creator can't have biological children). When the kid's mechanic serves as a mentor and emotional caretaker, she's a Motherly Scientist (Fatherly Scientist if he's a man).

May fall into Really 700 Years Old or Older Than They Look unless the robot was very recently built. If they were built very recently, they might actually be Younger Than They Look instead. In either case, it's common for the robot to feel that Not Growing Up Sucks.note though they may have it easier if they're a Transforming Mecha whose alternate form is an Older Alter Ego Most Astro Clones are Robot Kids.

Arale is tiny and adorable as she is mechanical.
(Plus she often loses her head)

Arale is tiny and adorable as she is mechanical.
(Plus she often loses her head)