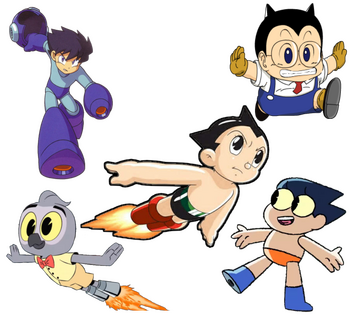 L - R, top to bottom: Mega Man, Obotchaman, Boyd, and Combo Breaker. Center: Astro Boy.
Astro Boy is one of the most internationally iconic and influential anime and manga out there. Its huge impact has led to it being referenced frequently, especially in sci-fi media.
Advertisement:

Astro is a Robot Kid created as a Replacement Goldfish son by Dr. Umataro Tenma after his young son Tobio is killed in an accident. Though Astro is a robot, he wants to blend in with humans. Astro has amazing powers, including Super Strength and Flight, and regularly fights crime, including his antagonistic father Dr. Tenma and various other robots. Astro is adopted by the kindly Professor Ochanomizu after Tenma abandons Astro for not being a perfect clone of Tobio. Astro also has a large family of other robots, including his younger sister Uran.

Many of Astro's expies follow his basic character in one form or another. They'll be young-seeming humanoid (usually ridiculously human) robots, often developed as Replacement Goldfishes. They are usually given Super Strength and flight (or at least hovering) abilities. It's not uncommon for them to have Pinocchio Syndrome and want to Become a Real Boy. Astro Clones are often created by a skinny Tenma-looking scientist or a rotound Ochanomizu-looking one. When it comes to designs, they're usually white-and-blue or black-and-blue, with pointy Anime Hair.

Not to be confused with the 8-bit video game Astroclone.

B.O.Y.D/2BO shares many characteristics with Astro, including his iconic rocket-boosters and flying pose.

B.O.Y.D/2BO shares many characteristics with Astro, including his iconic rocket-boosters and flying pose.