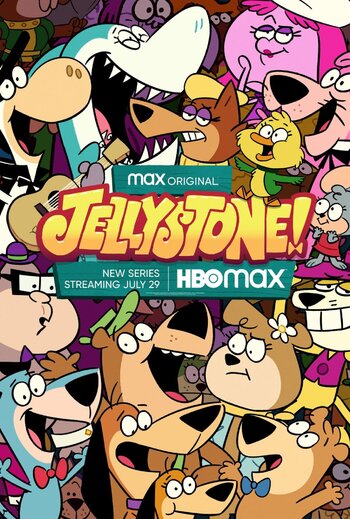 A funtastic world, though not quite how you remember it.
"There you have it. Our town is truly the worst."
— Snagglepuss
Advertisement:

Jellystone! is an animated series that premiered on HBO Max on July 29, 2021. Created by C. H. Greenblatt (Chowder, Harvey Beaks) for Warner Bros. Animation, the series features new versions of classic Hanna-Barbera characters, primarily those from the 1960s.

The series takes place in the town of Jellystone, and revolves around the lives of its citizens as they live, work, play, and (as is often the case) destroy the town in some outrageous way. Among the residents are Yogi Bear, Cindy and Boo Boo, the town's medical staff; Huckleberry Hound, the mayor, and Jabberjaw, an employee at Magilla Gorilla's clothing store that supplies everyone's hats and bowties.

It aired on Cartoon Network starting September 4. Cartoon Network's YouTube channel also hosts a series of one-minute shorts including Kid Styles for Old People!, in which a child gives a makeover to an adult. First episode here.

Yogi Bear and Huckleberry Hound have a battle in an anime art-style. Complete with Japanese voice actors (with additional English subtitles).

Yogi Bear and Huckleberry Hound have a battle in an anime art-style. Complete with Japanese voice actors (with additional English subtitles).