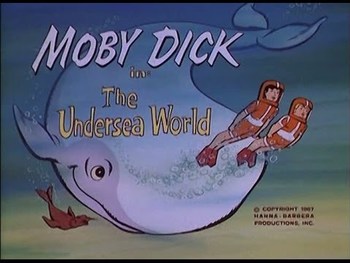 This Hanna-Barbera series was another in the studio's 1960s action lineup. Moby Dick features the adventures of Moby Dick the Super Whale with his friends Tom and Tubb and Scooby the Seal. The two boys were blown away from their uncle's exploration boat and rescued from sharks by the giant white whale, who becomes their guardian against the numerous perils of the ocean.

This series so highly deviated from Herman Melville's book Moby-Dick that it might as well be In Name Only, unless our lead himself only is named after said book without actually being the same whale.

In his original series, Moby Dick shared a half hour with Mighty Mightor.