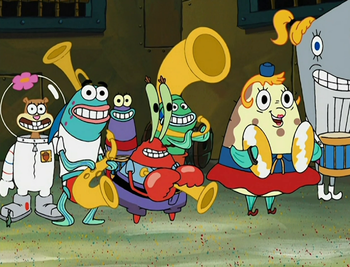 This can only end so well...
"Anyway, it all happened during that magical summer of 1985. A maturing Joe Piscopo left Saturday Night Live to conquer Hollywood. People Express introduced a generation of hicks to plane travel. And I was in a barbershop quartet."
— Homer Simpson, The Simpsons, "Homer's Barbershop Quartet"
Advertisement:

Our main character for whatever reason decides to form a musical group with their friends or family members. Initially riding on the highs of their success, the fame gets to their head and causes problems. Eventually the band breaks up and the characters return to their normal lives.

In some instances of this trope, one character will end up becoming a solo artist, whether by their own decision or at the insistence of their manager.

Not to be confused with Banned Episode or Musical Episode, the latter of which has the characters singing songs, with or without a band. If the band in question is made up of exclusively family members, then it's a Band of Relatives.

Inevitably, every band here is a Fake Band.