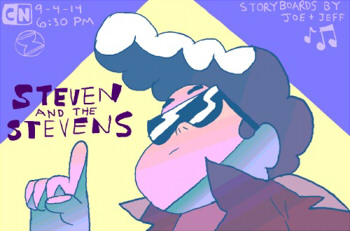 The episode begins with the Gems in the Sea Shrine, looking for The Hourglass. Steven picks out the smallest hourglass. Pearl tells him that the hourglass would not be "so small and insignificant", it would be "beautiful and grand". Garnet chooses the biggest hourglass in the sea shrine. Pearl asks how they will transport it to the warp pad, and Garnet claims she can carry it. Pearl stops her, saying that they need to be careful which one they touch, reminding her what happened "last time". Amethyst then makes the call by grabbing an abstract designed hourglass. After she grabs it, the sea shrine's roof breaks, resulting in a huge amount of water pouring into the shrine. The Gems are about to leave, but Steven wants to get the small hourglass that he picked earlier because Amethyst got to keep hers. He runs and gets the hourglass, and as he runs back, a huge wave of water flows towards him. Garnet shapeshifts her hand, making it large enough to pull Steven away from the danger. The Gems then warp out of the sea shrine and back to the Beach House. When the Gems get back to the house, Steven asks if they will return to the Sea Shrine. Pearl then angrily says that they, unfortunately, have to wait another 100 years for the Sea Shrine to reform. Garnet then changes the subject by telling her that there is a lobster on her butt, to Pearl's dismay.

A Cookie Cat-shaped alarm clock starts to ring and Steven is reminded of the upcoming Beach-A-Palooza, which he is to be performing in with his father. He leaves the house, saying goodbye to the Gems and that it was fun on the mission.

Steven goes to It's a Wash to meet his father for their rehearsal, but cannot rehearse with him, as Yellowtail's boat is stuck in the car wash. Steven leaves, disappointed, saying that he wishes that the "stupid" boat was not stuck there in the first place. He suddenly gets teleported back in time, confused at first but soon glad to realize that he can prevent the boat from getting stuck. He runs to his father, calling, "It's fat! It's fat!" Greg stops Yellowtail from reversing it into the car wash. Steven realizes The Hourglass took him back in time with joy.

But while Greg tries to explain to Yellowtail that the boat is "fat", the truck pulling the boat moves backward and hits a pole, which breaks and crashes onto the truck, setting it on fire. The fire quickly spreads to the telephone wire and sets the car wash ablaze. Steven then wishes he could go back in time to stop himself from stopping his father. He goes back and manages to stop himself, both Stevens then deciding to create a band and go back in time to get more Stevens.

The scene cuts to four Stevens singing the song "Steven and the Stevens". After the song, they decide the "original Steven" should be the leader of the band. Steven 1 then labels the other three Stevens 2, 3, and 4. He states that Steven 2 is "the smart one", while 3 is "the funny one" and Steven 4 is "the sensitive one". Steven 1 then brushes his hair up, and labels himself "the handsome one".

Steven 4 then says something funny. Steven 1 tells 4 that Steven 3 is "the funny one", but then Steven 3 says they are all equally prone to being hilarious. Steven 1 then says that is too smart of an observation. 2 then asks who he is again, and 1, getting rather frustrated, tells him he's supposed to be the smart one. Steven 4 then asks if they are all not good looking since 1 is the handsome one. The other two Stevens disagree and suggest they all get jobs as models. Steven 1 then says that none of them is the handsome one, making all the other Stevens feel sad. Steven 1 then decides they take a five-minute break.

Steven goes outside and says he cannot believe that he is so annoying. He considers quitting the music business when suddenly he hears a loud racket. He enters the house to see that all 3 Stevens are playing loud music and asks them to stop. The other three Stevens decide to kick him out of the band, saying his attitude is not working for them. Steven 1 angrily objects about him being kicked out and tells the other Stevens that without him they would be nothing. This suddenly gives 1 the idea to go back in time to stop himself from ever creating the band.

The other three Stevens pursue him to different timelines, as far as back to "Gem Glow", and to "Rose's Room" which created more Stevens. Then they go to "Ocean Gem" where Steven 1 asks the hourglass to go back to the beginning. Steven gets teleported to the beginning of the episode and asks the Steven there to give him the hourglass. Suddenly, all the other clones teleport to exactly the same place. Steven finally gets the hourglass but stops laughing manically when he sees how scared his past self is. He sees the chaos he had created and shouts to all the other Stevens to stop. They all stop and realize their mistakes, and Steven destroys the hourglass of time in order to bring things back to where they were. All the copies of the hourglass get destroyed along with the Stevens, and before all the Stevens disappears, the last Steven tells the Steven of the beginning that Greg can't play in the Beach-a-Palooza because of the boat being fat. He kisses Steven and tells him to stay cool, leaving a very confused and shocked Steven.

Steven and the Stevens

FYI, yes, this episode is canon.

Example of:
Me's a Crowd

Steven and the Stevens

FYI, yes, this episode is canon.