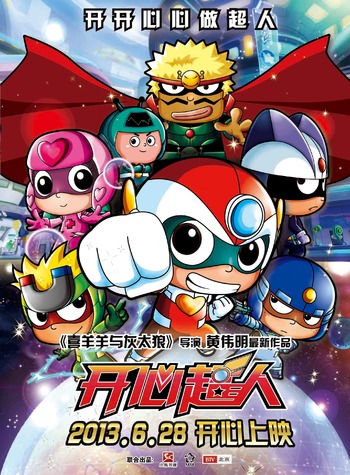 The poster for the first movie.note Counterclockwise, starting from front: Happy S., Careless S., Careful S., Big M, Little M, Sweet S., Smart S.
Universe is wide to fly
Flying home with happiness
To explore, let us go explore
We aim the highest in life!
Cloud is wafting gently
A dream that came out
A little bit outline
Go flying, go flying!
Fly over the night and dawn
La, la, la, la
The wind is blowing gently
Dream wings and meteors shot the sky across
Through time and space
And return to the place of dreams!
— Official translation of "Happily Flying Forward" 《开心往前飞》, the original theme song.
Advertisement:

A relatively well-known TV show in China, Happy Heroes (开心宝贝), also known as Happy Friends in official English translations and later retitled in the original Chinese as 开心超人联盟 (Kaixin Chaoren Lianmeng, or "Happy Superman Alliance"), tells the story of a group of child superheroes who work to save the world Once an Episode from monsters and invading aliens and such. It was created in 2010 by one Weiming Huang/Leo Huang, the same person who created the especially popular Chinese cartoon Pleasant Goat and Big Big Wolf. It's an ongoing work with countless episodes.

Most of the adventures take place on Planet Xing, in a time where interplanetary travel is common. Planet Xing itself happens to be especially technologically advanced, and most of the population consists of robots that act exactly like humans with the full range of emotions and such (although there are humans too, as well as some aliens and anthropomorphic cows and other animals).

Planet Gray's expansion agency sent out two of its fighters, General Big Guai/Big M. and Corporal Little Guai/Little M., to conquer Planet Xing. With them, the two had five Jixie stones that, in addition to being able to give an inanimate object life, contain immense power, more than enough to conquer a planet. However, due to their ineptitude, Big and Little M. lose all but one of the stones, and crash-land themselves on the planet.

On Planet Xing, a genius engineer, Doctor Zhai/Doctor H., finds four broken vehicles while searching through a rubbish dump for things to fix. Unbeknownst to him, these vehicles were hit by and somehow combined with the four Jixie stones. When Doctor fixes them and then a broken power line falls on them, the four vehicles are revived into four children with superpowers. With Doctor as their surrogate father, Hero Kai/Happy S., Hero Hua/Smart S., Hero Tian/Sweet S., and Hero Chu/Careless S. defeat their enemies and protect the planet time and time again. Eventually, they are joined by a fifth, revived from the one stone that Big and Little M. had managed to keep- Hero Xiao/Careful S., and even later, Jialuo/Kalo, a former admiral of a now-destroyed planet, Planet Adeli. Despite the number of times that they fight, however, the Heroes never do discover the identities of their enemies.

has an article on it. There is also the Chinese version of The Other Wiki, Baike, which has an in-depth article on this show here

. All three of these websites are in Chinese, however. For updates on upcoming events go to the official Weibo

At least three English dubs of this show have been produced. One covers Seasons 1 and 2, is produced by the same production company that did the Disney English dub of the Pleasant Goat and Big Big Wolf season Joys of Seasons (and, indeed, shares some voice actors from that dub), and can be found on one of Alpha Group Co., Ltd.'s official YouTube channels, Lookus English

, but since has been unavailable for now. Another of these dubs covers Seasons 7 and 8 and is available on Miao Mi

, an educational service that teaches Mandarin Chinese to young children, along with the original Chinese versions of the episodes; for this dub, however, you have to sign up for the service to see the episodes. The third dub is of Season 10 and the Happy Heroes and the Magical Lab mini-season, and not much info is known about it besides it being from Zoland Animation.