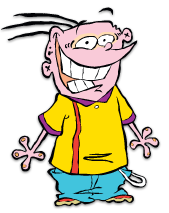 A guy or gal with no visible neck whatsoever. They all seem to have their heads directly attached to their shoulders. Most no-neck chumps are on the short side, and second place goes to hulking figures. No-neck chumps of average height are rare.

A lot of cartoon characters fall under this trope, but there might be an almost equal amount with extremely skinny necks. Like The Noseless, this might just be part of the art style. A lot of time it's that way for characters that are drawn as having a head that is just a circle on a body.

This might be possible with a character being so fat that his neck is as thick as his head, but be careful with naming real life people that fall under this though...

Note that this is different from a Cephalothorax or a Waddling Head, who basically is just a head with arms and legs. A No-Neck Chump has a "normal" body, minus a neck. Related to Ring Around the Collar. Contrast Long Neck.

Perfect for children with no necks!

Perfect for children with no necks!