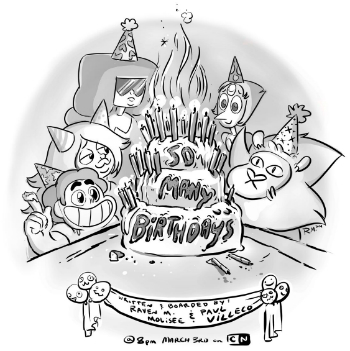 The episode opens with the Gems investigating a terrible smell from Amethyst's room, which turns out to be a several-year old burrito. As Amethyst takes a bite of it, Steven finds an old framed picture with the older Gems plus his mother in a time period that looks to be several centuries ago. Pearl explains to him that they're much older than any human, but when Steven asks if they'll live forever, she reveals that they don't age but can die from injury. As Amethyst begins to feel the aftereffects of eating expired food, Pearl adds that they can't die from food poisoning either. This prompts Steven to ask them how they fit all their candles on their birthday cakes, only to discover that birthdays are a foreign concept to the Crystal Gems. Aghast, Steven resolves to properly celebrate every single one of their missed birthdays.

Advertisement:
Steven: I pledge that you will have your birthdays!

Steven attempts to hold a birthday party for each of the Gems in order of Amethyst, Pearl, and Garnet. Not understanding human customs, the standard birthday traditions soar over the Gems' heads, which causes Steven to wonder if he's being too immature. As he leaves and walks through town, he unknowingly begins to age rapidly, with every thought about being too old for various things causing him to grow older several years. By the end of the day, he's become a middle-aged man, and he finally realizes this when he walks into the Big Donut and realizes Lars and Sadie don't recognize him.

When a misunderstanding causes Sadie to chase him out of the store, Steven runs down the beach as the aging process speeds up, until he becomes an elderly man collapsed upon the sand. In this state Lion finds him and brings him back to the other Gems, who are cleaning up the party confections. Upon seeing Steven, they try desperately to revert his age with the birthday traditions he taught them earlier, since his half-human genetics would cause him to die of old age. Unfortunately, each attempt only increases the aging process. When Garnet has a Not So Stoic moment and tries violently shaking him, the Gems begin arguing, which causes Steven to tell them to stop. As he does so however, he reverts from a dying, ancient man back to a teenager state. Pearl realizes that his physical age is connected to his mental state of mind, so the Gems try to snap him out of his depression and make him feel young again. They manage to succeed, and aside from having to sort out the length of his legs, Steven is once again restored to his original age.

We Iris Out over Steven's face as he laughs about the fact that his legs are still adult legs.

Thanks to his gem, Steven's age fluctuates based on his state of mind.

Thanks to his gem, Steven's age fluctuates based on his state of mind.