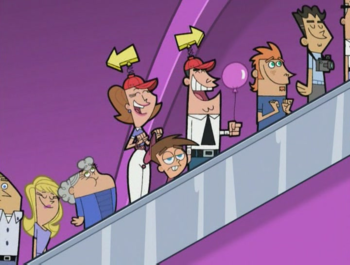 "When do we get to the ride?"
"This IS the ride!"
"Why would you want to watch TV when you can watch a snail crawl for hours on end?"
— Sinclair, Futurama, "Obsoletely Fabulous"

This is when a character or group is easily amused by a game, pastime, or hobby that would normally be considered boring and lame. It is usually used to show that these characters are immature, dull, weird, or have no exposure to real fun — or sometimes just because it's funny.

A Subtrope of Indubitably Uninteresting Individual. Compare A Good, Old-Fashioned Paint Watching, Fun for Some, Only One Finds It Fun, Plain Palate, and the Museum of Boredom. Related to Nerds Love Tough Schoolwork.

Can you feel it, Mr. Krabs?

SpongeBob and Patrick's night out turns out to be lame, everyday stuff.

Can you feel it, Mr. Krabs?

SpongeBob and Patrick's night out turns out to be lame, everyday stuff.