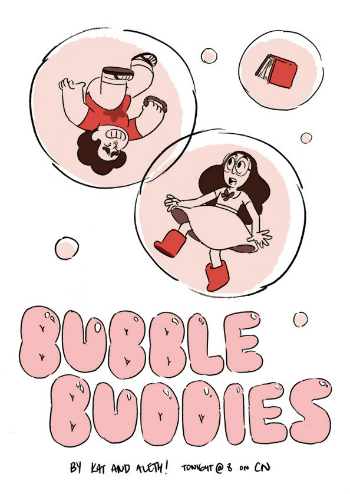 The episode begins with Steven riding his bike down the steps of the Gems' home while Pearl discusses a series of earthquakes, theorizing that they are too close together to be natural. After a brief talk with the Gems, Steven heads to the beach where he tries, and fails horribly, to get the attention of a girl sitting on the beach, reading a book. After knocking it over and running off crying, Steven returns to find the gems have been watching him the whole time, figuring out that Steven has a crush on the girl. Pearl tries setting up a play date but Garnet shoots her down and tells him to just go talk to her, promising not to mess with his "Funky Flow" by watching. Steven then grabs a glowing ring from the freezer and heads out.

As Steven goes to talk to her, another earthquake happens, sending a torrent of rocks down on top of her. Steven dives to save her, accidentally creating a magical protective bubble from his Gem. Steven finally introduces himself to the girl, Connie, and soon fills her in on just who he is and what he does, while Connie reveals her dad's in private beach security, and as such she moves around a lot, and thus is unfamiliar with the city. Steven, unable to disperse his bubble, attempts to have them roll home, but the temple's steep slope prevents them from rolling up and the Gems having promised not to watch means they can't see Steven and Connie's predicament.

Deciding to go another route, Steven heads to the Big Donut to get Lars and Sadie's help. Lars proceeds to tease Steven about Connie and kiss, and for some reason lick, the outside of the bubble while Sadie tries to open it with a hammer, to no avail. Sadie then tries breaking a chair over it, with no effect. Steven tries another plan, this time having Onion fire a harpoon at the bubble, which only results in it destroying a ship Connie happened to like. Steven then tries one last plan: letting a rollercoaster at Funland hit the bubble. Despite how dangerous the plan is, and Connie's misgivings about it, Steven tries it anyway after an earthquake, but after the coaster is abruptly stopped, it sends the bubble flying into the ocean.

Under the sea, Steven and Connie find the source of the earthquakes: A giant worm monster with a gem inside it that eats glowing seaweed. The monster digs its way underground again; the crack created by its passage send Steven and Connie deeper below the surface. Connie finally breaks down, bursting into tears as she explains how no one but her parents will miss her when they die at the bottom of the sea due to her having no friends. Steven promptly pulls out the glowing ring from before, a bracelet, and gives it to her, offering to be her friend and explaining he saw her drop it a year ago at a parade. Touched by the action, Connie admits she had a great time... just as the bubble finally pops. The two quickly swim to the surface and arrive back on shore... as does the worm monster, attracted by the glow of Connie's bracelet. After realizing this, Steven takes it from her and gets the creature to tie itself around the dock, causing the dock to collapse on it, destroying it. The Gems arrive and Connie talks about how amazing Steven was while Garnet collects the beast's gem. Steven returns the bracelet and Amethyst and Pearl start to talk to Connie before Garnet carries them off, telling them not to mess with "his funky flow".

As Connie questions what this means, we Iris Out on an embarrassed Steven.