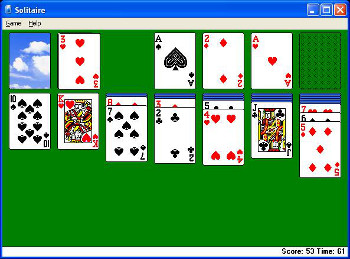 A game of Microsoft Solitaire being played on Windows XP
"For over twenty years, a video game has tormented mums, dads and office workers the world over. And it has nothing to do with orcs, racecars or terrorists. It’s about cards. That game is Windows Solitaire, which from Windows 3.0 through to the Windows 10 of today has been (excluding a short break with Windows 8) included free with every copy of Microsoft’s operating system."
— "The Story of Solitaire, One of the World's Biggest Video Games"

Solitaire — also known as Patience — is a large family of card games played with standard playing cards that are designed to be played by a single player.

Technically, the name "Solitaire" actually refers to any game designed to be played by oneself, not just card games — however, Solitaire card games are so ubiquitous that the term is often used on its own to refer to them. Alternative names include "card solitaire", or the name "Patience" is used in Europe.

Very broadly speaking, the goal of solitaire card games is to take a shuffled set of cards (some games shuffle two or more decks together) and, under the constraints imposed by the game, make decisions about how to play those cards in order to end up in some winning end-game state.

Most commonly, this involves building and manipulating a tableau of cards, and using special moves on the tableau to eliminate cards from the game, winning when you have successfully eliminated all cards. A common end goal in many solitaire games is to eliminate all cards in sequence from Ace to King for each of the 4 suits.

The number of varieties of card solitaire is so vast that it would not be feasible to cover them all here. The open-source solitaire collection PySolFC

lists over a thousand variants. Each variant has different mechanics and constraints on what actions are valid.

The most well-known of all solitaires is Klondike

- indeed, it is so well-known that the name "Solitaire" is often used to refer to this game alone. (If you simply type "solitaire" into Google, for example, it will actually give you a playable game of Klondike).

Solitaire games were originally played with real playing cards, with some manufacturers even making miniature decks to allow players to play solitaire games with more elaborate layouts or on smaller tables. However, with the growth of home computing in the 1990s, computer solitaire quickly overtook physical solitaire. This is largely due to solitaire card games being bundled with Microsoft Windows, starting with a version of Klondike solitaire in Windows 3.0 in 1990, and later adding Freecell and Spider in subsequent releases.

Computer solitaire games also have the advantage of being very accessible and allowing players to quickly launch elaborate multi-deck solitaire games that would be cumbersome to arrange physically. They are also quite popular on mobile devices due to the simple drag-and-drop interface requirement.

of many of the variants.