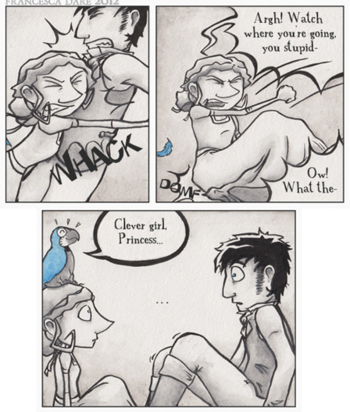 A variety of Meet Cute: A bad first impression wherein a character in a hurry or simply not paying attention runs into another character as their first meeting, often done while Late for School.

Sometimes the inattentive/hurrying character apologizes for doing so, but the other character shrugs it off with some snarky comment. After all, it could be worse. Far worse. With the latter situations, this usually starts a small animosity but is a nice guarantee to the audience that they'll get together by the end of the show.

If there is no animosity involved, this kind of situation is perfect for a Love at First Sight scenario.

If both parties are sufficiently inattentive, they wind up piled one on top of the other on the ground in a position easily mistaken for extreme passion. After a beat, the two will wind up in an Instant Seiza position, facing away from one another and blushing furiously. One party could also be mistaken for a pervert. This is a favored pickup tactic of Cute Clumsy Girls. Or it might give a more sweet atmosphere.

A sweeter method is for one character to drop a pile of things, and the characters's eyes to meet as the other one gives them a hand picking things up.

Compare Watch Where You're Going!, Suggestive Collision and Funbag Airbag, Living Crashpad. This is, of course, a kind of Dynamic Entry. May be a ruse by a Percussive Pickpocket. May be caused by Crashing Through the Harem.

Daphne Bridgerton meets her love interest Simon Basset by bumping into him at a party. They argue a bit, setting the tone for their future interactions.

Daphne Bridgerton meets her love interest Simon Basset by bumping into him at a party. They argue a bit, setting the tone for their future interactions.