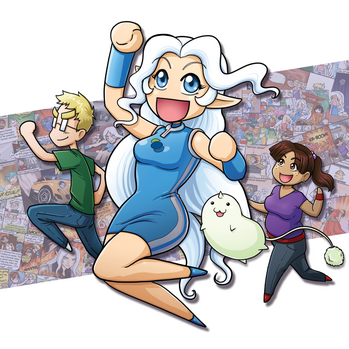 is a webcomic created, written, and drawn by Robin Sevakis and is found on the Anime News Network website. Beginning in October of 2007, the comic follows the day-to-day experiences of Nina, a "news elf" who has just been assigned by ANN to learn everything about anime and considers it her "reason for living". Needless to say, Hilarity Ensues, as is expected with the often unpredictable world of anime, manga, their fanbase, and everything else associated with it. Joining her on her "mission" are Kevin, a somewhat stereotypical fan (though certainly better than other types) who is well-versed in otaku culture, and Paola, who is somewhat of the more "straight man" compared to Kevin though she certainly has her quirks as well.

Beginning as a weekly comic, it eventually turned into a three-a-month release, but long hiatuses are fairly rare and often are filled by guest-written/drawn strips. Robin's work as a whole is well-praised by the fans on ANN. The series ended in October 2013 after 6 years and well over 100 comics.