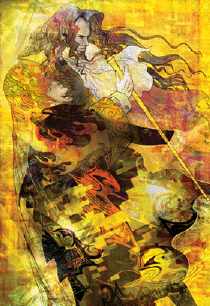 When Escher met Klimt
"Bide your time, and hold out hope."
Advertisement:

The year is 5053. A young French nobleman, Viscount Albert de Morcerf and his friend Baron Franz d'Epinay are partying hard on the moon colony of Luna, when a dark, ominous, blue-skinned stranger suddenly steps into their lives. Said stranger is the self-made Count of Monte Cristo, a man with incredible riches, unusual powers, and an unnatural interest in our hero, Albert. (The Count also appears to have some sort of mysterious connection to Albert's parents—as if he had somehow known them in the past, although neither of them can ever remember seeing the Count before.)

As time passes, the Count insinuates himself further and further into Albert's life and into the lives of the people he knows. But what is the Count's true reason for doing so? Is he, as he claims, a harmless wannabe nobleman who just wants to be introduced into High Society, or does he have a much darker purpose in mind?

Gankutsuou is a 24-episode paraphrased P.O.V. Sequel of Alexandre Dumas' famous novel, The Count of Monte Cristo, set far into the future (thus also sharing some similarities with Alfred Bester's The Stars My Destination) and viewed through an anime-and-LSD filter. Because it's based on a work of Western Literature, it has an unusual pace and plot for an anime, choosing to ignore many of the most common tropes that one tends to find in that medium. It also has a weird visual style with fantastically rendered CG backgrounds and characters with elaborate clothing patterns that remain stationary as the clothing and characters themselves move. Some viewers are awed by this aesthetic, while others are so put off by it that they stop watching the show. (You'll know about five minutes in what kind of viewer you are.)