Literature / The Stars My Destination 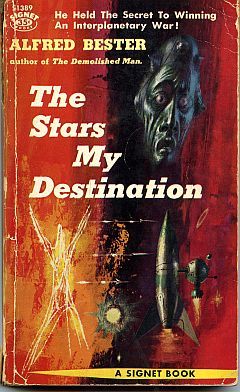 Gully Foyle is my name
And Terra is my nation
Deep space is my dwelling place
And death's my destination
Advertisement:

The Stars My Destination, aka Tiger! Tiger! note there is some debate as to which is the original title is a science fiction novel by Alfred Bester.

It is the twenty fifth century. An age when humanity can jaunte across the world, where telepaths are, if not common, then not unheard of. An age where humanity has spread across the solar system— a golden age that no one knows they are living in. An age when conflict between the Inner Planets and the Outer Satellites is about to end the age of the Global Wars by means of the outbreak of the first Solar War.

None of this matters to Gully Foyle—the quintessential everyman, if you are convinced Humans Are Morons. No education, no skills, no ambition, just a Mechanic's Mate Third Class on the freighter Nomad, which lies crippled in the void between the planets. All he has left is a powerful will to survive, and he has, somehow, for six months when the spaceship Vorga encounters the wreck of the Nomad, sees the distress signals— and passes by, leaving him to rot.

Now Gully Foyle has a pressing reason to do more than simply survive, as he had done on Nomad and all his life before hand. Now, he's headed back to Terra, and he will have his revenge, no matter who stands in his way...

The book's gritty Anti-Hero and experimental typography made it a much-imitated prototype for the New Wave Science Fiction movement that sprung up a few years later.