Comic Book / The Tomb of Dracula 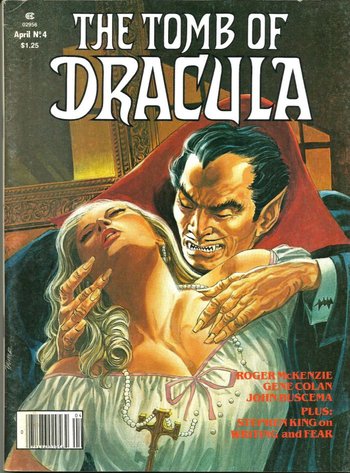 Dracula sinks his fangs on yet another victim.
"The years have been long, and I am weary of them. I yearned for those things for which I once lived... The clouds across a glowing moon... The baying of night's children... And most of all, I yearn for that most pleasing taste... The sweet nectar of life itself!"
— Dracula, the first issue
Advertisement:

The Tomb of Dracula is a Bronze Age horror comic book from Marvel. It follows Count Dracula's exploits throughout Europe and America as he tries out various evil schemes while fighting with vampire hunters and various monsters. The series is most well known today for introducing vampire hunter Eric Brooks, a.k.a. Blade. Most issues were drawn by Gene Colan and written by Marv Wolfman.

The first volume of the series ran for over seventy issues in the seventies. After its cancellation in '79, it was immediately followed by a black and white volume 2 that only had six issues. A Spin-Off series named Dracula Lives! ran alongside the main book for twelve issues (and one annual issue of reprinted stories).

There have also been two four-issue miniseries bearing the book's name afterwards; a Darker and Edgier tale titled Day of Blood! Night of Redemption! in 1991 (which resides in its own continuity) and the other one in 2004, which was mostly to show how badass Blade can be. Dracula himself is still a recurring villain in the Marvel Universe.

This series was also the basis of the anime movie Dracula: Sovereign of the Damned, which is a... loose adaptation at best.

The Tomb of Dracula provides examples of: