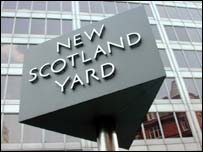 The HQ of the Met is at New Scotland Yard, on the Victoria Embankment close to the Houses of Parliament. This is actually the third New Scotland Yard. (The name comes from the fact that the original HQ had a public entrance opening onto Great Scotland Yard, a street which got its name for housing the diplomatic mission of the Kingdom of Scotland in Tudor times.) The force is divided into borough commands, each having a two letter code seen on officer's shoulder numbers.

The Met Police is one of the two UK forces led by a Commissioner as opposed to a Chief Constable. This is currently Dame Cressida Dick.

In the nineteenth and early twentieth centuries, when few police forces outside London had trained detectives, they would often call on Scotland Yard to send one to investigate any serious crime whose perpetrator wasn't obvious or where a suspect was socially important enough to make arresting them embarassing for a local cop (the real-world source of the Smith of the Yard trope). This is very rare now in Real Life unless you were dealing with a wandering Serial Killer and even then, real-life local forces would object. However, it often appears in works with contemporary settings by American authors whose knowledge of British police procedure still comes mostly from Agatha Christie or Dorothy L. Sayers novels.